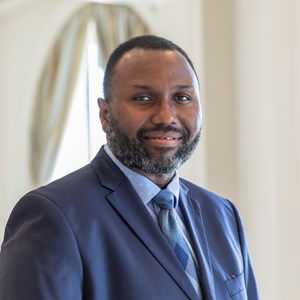 Speaker Bio
Ben Morgan started his career in construction 31 years ago, which includes the last 25 years with Barton Malow. After graduating from the Milwaukee School of Engineering with a Bachelor of Science Degree in Architectural Engineering, Ben began his career in project management with the Milwaukee Urban League and then as a Project Engineer with Toki & Associates, Inc., an engineering firm in Milwaukee, Wisconsin. He joined Barton Malow in 1996 as a field superintendent and quickly moved into management positions and ultimately to Vice President – a position he now holds. In 2006, Ben received a Master of Science Degree from University of Maryland College Park, specializing in Construction Management. He has a diverse project history, which includes assignments on detention centers, stadium, and convention center projects to educational facilities. His focus over the past twenty-four years has been servicing higher education, sports, and healthcare clients, including Johns Hopkins University, University of Maryland, Morgan State University, and Coppin State University to name a few. In 2016, Ben successfully graduated from Leadership Maryland. He was also the recipient of Barton Malow’s first-ever “Ben C. Maibach, Jr., Leadership Award,” an honor named after the past CEO of Barton Malow awarded to employees with high leadership qualities. Ben remains active in Baltimore-focused community organizations and efforts.

Ben’s most notable personal accomplishment thus far in life is being the Chairman of the Board of Deacons at Fulton Baptist Church. This position has allowed him to serve people in need and has taught him that it is much better to give than to receive. His highest career achievement is becoming the Vice President of Barton Malow’s Maryland office. This position allows him to lead a group of professionals in a direction that is much greater than any one person and forges unity, diversity, and accountability. Ben also teaches as Adjunct Professor in Morgan State University’s Construction Management Department and serves on Morgan State University’s Construction Management Advisory Committee as Chairperson.
×