Life lessons arrive in many forms. At times they come crashing into your life, making themselves known dramatically and with a flourish, wreaking havoc. Other times, they appear subtly and step in through the back door, providing helpful guidance. In the world of construction, there are many lessons that I have had to learn the hard way, through ‘experience.’ In reality, that is just a nice manner of stating that I screwed something up because I didn’t know any better, and unfortunately, didn’t even know enough to ask anyone for helpful guidance.

Somewhere around the very young age of twenty-three, I was promoted to a project manager position at a commercial construction company. I was excited about the promotion, and equally thrilled when the local newspaper, the Gwinnett Daily News, asked for an interview. This was the 1980s and a female working in the construction industry was newsworthy. When the interview appeared in print, and I read through it, my pride turned slowly to horror, as I was mortified to read that the article was actually just a transcription of our interview. I cringed as I read through my “well, you know, like I like being a project manager because well, you know, like, it’s a great honor.” I told myself that I would never grant another interview to another newspaper, ever. I held tightly onto that resolve, even when, many years later, the Athens Banner-Herald asked me repeatedly for an interview while I managed the construction of the Classic Center on the edge of downtown Athens. After many failed attempts over the course of several weeks to coerce me into an interview, the exasperated journalist finally asked me why I wouldn’t grant him the request. I told him of my previous experience. He replied that the article he would write would be tasteful, would be just in the back section of the paper, the hometown section, for local people. He assured me that I would be pleased with it, and eventually, I reluctantly agreed. The day that the article appeared, the paper was waiting for me in my chair at the jobsite office. My picture was plastered across the front page of the paper, with the ‘tasteful’ title, “Beastmaster Not Your Typical Site Manager.” If I recall correctly, I shut my office door and didn’t emerge for the rest of the day. I learned my lesson once, and then, unfortunately, had to learn it a second time.

As a young project manager, I was nervous about starting my first project that I was officially to be in charge of, but I had an experienced superintendent assigned to my project to rely on. He was new to our company, but definitely not new to the industry. He had many rather large and complex projects on his resume. Our first project together was to build a food court addition onto one wing of Cumberland Mall in Cobb County. We demolished the exterior wall, put up a temporary partition, and ordered all of our structural steel, using the dimensions that were shown on the drawings. (Can you already tell where this is going?) I very diligently and painstakingly checked all of the shop drawings, double and triple-checking every dimension, every clip and bolt hole location. I made no mistakes, and when the steel arrived, it all fit perfectly on our new footings and went together like an erector set. When we finally finished the exterior skin and were ready to tie the two buildings together, we removed the temporary partition, and much to my horror and shock, discovered that the existing building was approximately 2’-0 higher than the original drawings had dimensioned it to be. Our roof lines were literally 2’-0 vertically misaligned. My very experienced superintendent apparently had been working on projects so large that he had assistant superintendents that took care of the detail work, and I was a very inexperienced project manager that never thought to verify field dimensions prior to ordering the steel. I can say wholeheartedly that this is a lesson that I never had to learn for myself again. Unfortunately, however, it is a lesson that, now as an owner’s representative, I failed to impart upon one of my contractors. And very much like my first mistake, they had a very experienced superintendent, accustomed to working on large projects, and a very inexperienced project manager, and they made a similar mistake with structural steel. Thankfully, however, theirs was not of the magnitude of my own mistake. It was, however, aggravating to me to see this lesson have to be learned again on a project for which I was providing some measure of oversight.

I am quite sure that many of us have a lengthy list of lessons learned…for us at UGA, some of those lessons learned are: use a waterproof coating on penthouse floors (after mechanical unit condensate water dripped through cracks in the floor onto lab equipment below), insure that soap dispensers are dimensioned on the drawings (so that they don’t end up getting stuck on a mirror as an afterthought), don’t use hot-applied roofing on a combustible roof system (no explanation needed), and many others. I believe we could all write a book, and perhaps we should. However, hopefully, most people only have to learn those lessons once, rather than ‘again.’ I wish I could say that I am in that former group, but my track record indicates otherwise. So when I attended a national COAA conference and heard Michael Carrancho, the Deputy Director of the Office of Planning Design and Construction of the Smithsonian Institution, speak about the lessons learned capture system that he had developed, all I could say was, well, he had me at lessons learned.

Michael was gracious enough to send to me his lessons learned forms, his PowerPoint presentation, to spend an hour with me on a Zoom call, and to educate me on how Smithsonian captures their lessons learned and uses their system. They are a much larger and more diverse institution than UGA, and our needs are not quite as complex, so we adapted their information to better serve our own needs. We formed lessons learned committee of four people, developed a lessons learned process that would be relatively easy to implement, committed it to writing and included it on our internal processes page. We spent a staff meeting educating our team on the purpose and importance of capturing and communicating lessons learned and outlined our new process, including a modified version of the forms that Michael had shared with us (figure 1). 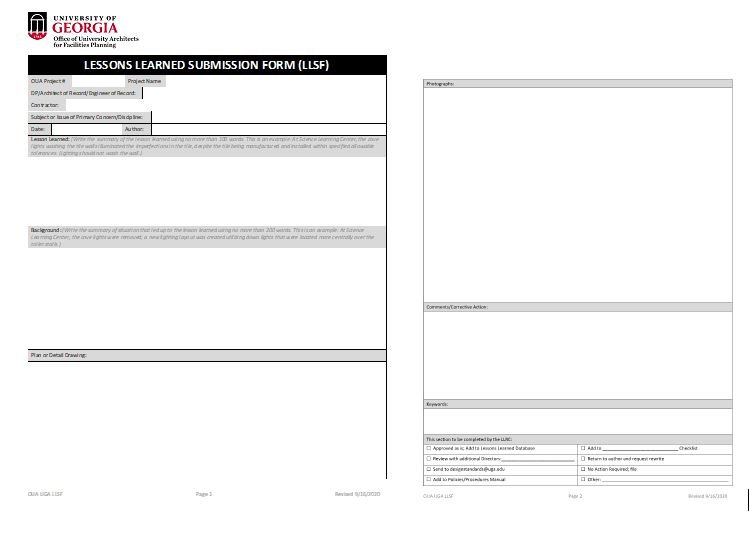 During the conversation that I had with Michael about Smithsonian’s system, he shared with me that one of their biggest challenges is continuous communication regarding their process so that it is utilized regularly. To address that at UGA, our lessons learned committee created a lessons learned email address where submissions are sent, the committee has a standing monthly meeting to review submissions, and we spend five minutes at each bi-weekly staff meeting sharing a lessons learned from the submissions that we receive. We try to impart some humor with the wisdom, as that often makes them more memorable. Our long-term goal is to input these lessons learned into a database that can be searched for using a keyword. That is a component that Smithsonian has incorporated into their system that we do not yet have the capability to mimic. However, having recently purchased a project management software system, we are hopeful that this final step of the process is hovering on the horizon. And then, my hope is that I can finally become one of those people that I envy…those who only have to learn something once…and not…again.